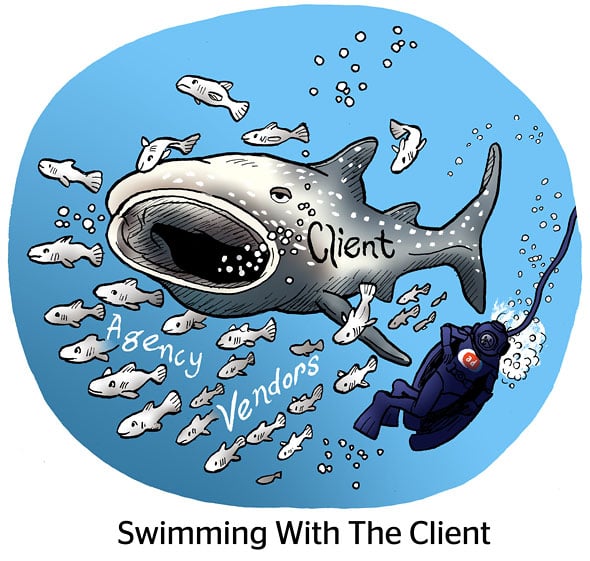 Outdoor clothing and gear manufacturer The North Face has reshaped its agency structure and its approach to marketing.

The process started with a decision to bring creative strategy and production in house. This year, The North Face consolidated further, but without ditching the agency role entirely.

The North Face put out an RFP to find a creative services agency that could take the content being developed by the brand’s internal creative team and turn it into ad formats that work across the internet, said Bethany Evans, the brand’s VP of media and channel marketing.

But consolidation is still the goal. And, recently, when The North Face ran an RFP for a programmatic buying agency, it went with WITHIN, which also happens to be the performance agency that won its creative services RFP.

Historically, brands treated “brand marketing” and “performance marketing” as two distinct categories. The North Face used to have separate teams for each. But now, The North Face looks at the entire customer funnel through one lens.

AdExchanger caught up with Evans to discuss The North Face’s in-housing and analytics shakeups and what channels she thinks are in an early growth streak. (Hint: TikTok and DOOH.)

AdExchanger: Why did you consolidate creative and media-buying agencies?

BETHANY EVANS:  We used to have a creative AOR, but we made the decision to pivot most of our creative work, so now our internal creative director and his team do our concepting and big productions.

There are so many nuances, though, when it comes to paid media and all of the different formats, which seemingly change daily. So, we realized we needed a partner specifically to take all of the internal work we’ve done and make the myriad of paid formats [we need] across the ecosystem.

We ran an RFP in the spring for a creative partner and started with WITHIN on creative. We added them as our media agency as of October.

What does this help you do?

From a practical perspective, being able to brief creative and media at once and have them come back with a holistic pitch deck, is a joy.

It used to be, even five or so years ago, that your media and creative teams might work together, [but] it wasn’t like you were iterating while the campaign was live. You’d regroup after to see how it performed. Now we’re optimizing in-flight.

There’s also this old idea in marketing that’s been treated as common knowledge, that brand and performance advertising are two different things. “Brand” is for building emotional connections and “performance” drives conversions, and never the two shall meet.

What I like about WITHIN is they essentially collapse that funnel to: “What are your objectives?”

We used to have one agency doing upper funnel and another agency for lower-funnel ads. It’s inefficient because you can’t think about frequency, suppressions and audience retargeting with two silos.

Has your attribution and analytics changed?

You will not be surprised to hear that, yes, it is a mess everywhere, and we’re trying continually to get away from last-click attribution. We know it’s skewed to certain channels, like search.

We do an annual marketing ROI study, which is directionally helpful, and throughout the year we do incrementality testing with match market tests. But one of the things that stood out to me about WITHIN’S approach is that they’re focused on marginal budget allocation. That means looking at every dollar to ask, “where should that next dollar be spent?”

We’re also looking at how to drive sustainable performance metrics, like lifetime value cohorts versus focusing on short-term revenue based on last-click. That’s going to sustain a more profitable, long-term relationship with the customer than prioritizing the immediate dollar.

To get specific, thinking about acquisition, typically a brand might have a target CPA of $X and say: “We want to reach people within that number and not afterwards.”

But, if we’re looking at a marginal CPA, we might actually be willing to pay a little bit more to acquire a certain type of person, because we believe that they’re going to have a higher lifetime value based on these models that we’ve built.

It gets more nuanced and less black and white in a way that’s actually the right thing to do for both the business and the customer. Someone’s first purchase may indicate very different types of lifetime value.

Which is to say, someone buying discounted off-season clothes indicates a different shopper type than someone whose first purchase is a full-priced coat with a premium because it’s made out of recycled materials?

Yes, and both those customers are important and valued, so being less strict with our acquisition thresholds to account for those types of nuance is one specific example of how that could come to life.

Are there any channels you’re excited about that could be bigger parts of the budget next year?

You’ll laugh because, of course, I’m going to say TikTok. I think that’s what most people would say right now – but it’s for a reason. That’s where the eyeballs are.

What’s interesting about TikTok is that it’s arguably an entertainment channel, not social media. Sure, you have social elements like comments, but people are spending more time watching video after video.

I’m even starting to think about them as, in some ways, more of a CTV channel than a social network. I’m very bullish on TikTok.

Any channels other than TikTok?

Travel advertising networks and digital out-of-home are another. We’re still trying to figure out what’s the right way for it to work.

For example, here in Denver, it’s our new home city and many people are traveling here, of course, for the ski season. We worked with WITHIN to do some DOOH at the Denver Airport.

It makes sense as a way to reach travelers and for us as a business to say: “Welcome, this is our new home.”

This interview has been edited and condensed.

How to fix the Internet?, Marketing & Advertising News, ET BrandEquity