Recent discussions on social media indicates there is considerable disagreement in how to use Heading (H1, H2) elements. Despite guidance from Google about the use of headings the SEO industry still can’t agree about how to use headings.

An informal poll on Twitter with nearly 2,000 votes shows over half of SEOs don’t know what Google’s recommendation on headings are.

Does Google Recommend Using One H1 Heading for SEO?

Surprisingly, nearly sixty percent of the respondents indicated that Google recommends just one H1 heading to a web page.

Quiz: Does Google recommend using a single <h1> in your content for SEO purposes?

Does Google recommend using one H1 heading? The answer is no.

Google’s John Mueller said in an office hours hangout that publishers are free to use as many H1 headings as they want.

“You can use H1 tags as often as you want on a page. There’s no limit, neither upper or lower bound.

Your site is going to rank perfectly fine with no H1 tags or with five H1 tags.”

Google has even published a video on this specific topic to dispel the idea that Google recommends only one H1.

In the video John Mueller says:

“Our systems don’t have a problem when it comes to multiple H1 headings on a page. That’s a fairly common pattern on the web.”

SEOs Can’t Agree on Proper Use of Headings

Anecdotal evidence from online discussions in Facebook SEO groups also show that there is wide disagreement on the proper use of headings. Some in the SEO industry cling to ideas that date back to the early 2000’s. Others state that John Mueller’s statements aren’t entirely true.

The topic of heading tags is so basic yet despite numerous clarifications from Google the topic remains extremely polarizing. 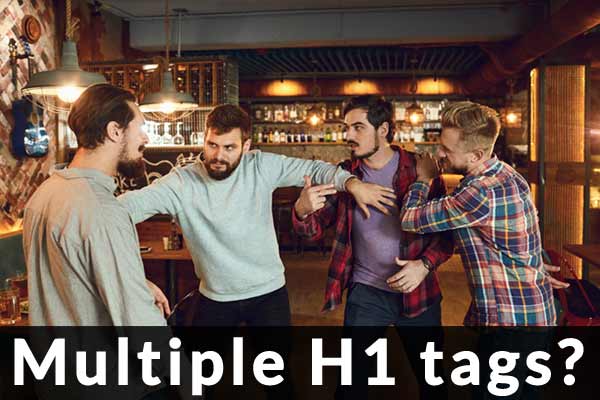 Some in the SEO industry will admit that Mueller said it’s okay to use more than one H1. But they will also insist that an H1 element is more important than an H2.

That used to be true back in the very early 2000’s. It’s not true anymore.

In the early 2000’s Google used headings as a clue to what a web page was about.

Words that were written in bold, italics and written in bigger fonts (using the old HTML 4 Font tag) were also regarded as clues as to what the web page was about, way back in the early 2000’s.

Some of these ranking factors were a part of the original Google PageRank research paper published in 1998 and in later research papers and revealed by Googlers in statements.

That’s the date that Google announced a new direction toward understanding what things are by using a Knowledge Graph.

The knowledge graph gave Google a deeper understanding of what things are so that it could move away from looking for clues in sequences of words (strings of data).

Google announced this in an article titled, Introducing the Knowledge Graph: Things, Not Strings.

“This is a critical first step towards building the next generation of search, which taps into the collective intelligence of the web and understands the world a bit more like people do.”

After the Google Hummingbird update announcement in September 2013 Google began a transition toward a more natural language style of understanding content and search queries.

In a September blog post Google announced that you could now do comparisons between objects by speaking to the Google Search App and other interesting things that relied more on knowledge of what things are and less on clues about what they are.

That was eight years ago and natural language processing has progressed so far that Google doesn’t rely on clues to guess what a page is about.

In 2021 Google can understand what the topic is about and relate it to a search query.

And that is why Google’s Mueller has been telling the SEO community that it doesn’t matter how many H1’s you use. The only purpose that a heading has is to communicate what a  section of content is about. That’s it.

The old 2001 way of giving Google a clue with keywords, that’s a thing of the past. Google doesn’t do exact match keywords in the search results anymore because natural language and AI technologies allow Google to understand what a page is about, especially if it’s well structured with the proper use of heading elements.

No Magic Ranking Power to an H1 Tag

John Mueller’s statement expressly says that a site will rank fine without an H1 or with five H1s. That means there is no extra importance given to an H1.

Mueller also stated in another Office-hours Hangout that a page will rank fine if you use an H2 or an H1, that they could be used interchangeably.

In response to this question:

…Will it still? I don’t know if it will still but it can. It can absolutely.”

Mueller went on to say that headings on a page (not just H1 but headings) help tell Google what that section of content is about.

“So headings on a page help us to better understand the content on the page.

Headings on the page are not the only ranking factor that we have.

We look at the content on its own as well.

But sometimes having a clear heading on a page gives us a little bit more information on what that section is about.”

Heading tags continue to be a strong signal of what a section of content is. Read: Google: Heading Tags are a Strong Signal

In a way the original poll was based on a trick question. Google’s SEO Starter Guide does not say anything about H1 tags.  So one answer to the question of whether Google recommends one  heading tag is no, Google doesn’t.

But John Mueller has said quite a bit on the topic of heading elements and that should not be ignored.

What is the Right Way to Use Headings?

I don’t agree that it’s okay to use multiple H1 headings.

I have consistently maintained that it’s best to use heading elements as they were originally conceived, which is with a hierarchical structure indicating the level of importance.

That means one H1 on the page to indicate what the entire web page is about. And the rest of the headings following a hierarchical structure, with H2 for each topic section and any subsections to those being indicated with H3 and if the subtopic has subtopics then going down as low as H4.

An additional consideration for those who might use multiple H1 headings is the negative impact on accessibility for site visitors on screen readers.

Back around 2001 to 2005 there used to be a keyword ranking bonus with heading tags. It was necessary to use keywords in the headings. That was in the early 2000s.

Yet for some reason this particular habit of regarding H1 as extra important continues even though we are in the age of AI and Natural Language Processing.

So to finish up, what’s important is to accurately describe what the topic of the article is with your headings and to use headings to provide a description of what a section of content is about.

This will help Google to better understand the content because in 2021 Google doesn’t rank exact match keywords the way it used to in 2001 (I know because I was doing SEO in 2001).

Today Google is ranking content, not keywords. It pays to think of the entire page in terms of “What is this about?” and each section as to how it relates to that overall topic.