Skip to content
Home » Tested: This wild gadget turns your laptop into a triple-monitor powerhouse

FOPO’s 13.3-inch triple portable monitor for laptops is definitely a niche solution for road warriors who want and can afford extra displays. But for those people, it might be a real asset.

Portable displays for laptops were just beginning to take off…and then the pandemic hit. Today, with two years to improve the design, manufacturers have moved on to portable dual displays like FOPO’s 13.3-inch triple portable monitor for laptops — and the concept, at least, is one of the most badass laptop accessories you can buy.

Essentially, the FOPO 13.3-inch triple display adds two extra 1080p 13.3-inch displays to your laptop, swiveling in from either side. If you’d like the appeal and risk of owning one of these triple displays summed up, here it is: If the display fits your laptop and if you have the right ports and if the display survives the trip, it’s a terrific addition to your overnight bag or backpack. Just make sure you check all the boxes.

FOPO supplied its 13.3-inch triple portable IPS monitor (S16) for review, and though the $529 price seems excessive, it’s also worth noting that individual portable displays cost roughly $200 or slightly less. A unified triple display combining two together may be worth the extra money. Browsing Amazon.com, you’ll see a few of these triple portable displays, which are essentially brackets or frameworks mounting a small portable display on either side of your laptop, creating a total of three screens. Though the brands differ — OFIYAA, FICIHP, and SideTrak, which uses a slightly different design — all of them offer the same appeal: If you have more than one display at home, you’ll see the same benefit from portable displays on the road, too. These, of course, slide into your bag.

Here are the basic specs of the 13.3-inch triple display (model S16) as supplied by FOPO. Most of these specifications include some important fine print, which we’ll discuss as we go through the review.

FOPO’s triple monitor mounts the two displays on either side of your laptop’s screen, supporting them via a plastic framework or bracket that slides together using a rack-and-pinion gear, grasping your laptop on all four corners. Setting it up takes a minute or two of fiddling, since the framework essentially hangs off the top of your laptop’s screen, and is secured by a pair of tabs at the bottom two corners. Laptops with strong supporting hinges may be able to support the 2.87-lb triple display by themselves. Otherwise, a thin popout kickstand can help support the contraption if you prefer to work with the display reclined.

Having used FOPO’s triple display for a few days, we can confirm that the concept is sound. If you’re the type of person who believes that their productivity increases by being able to see more screens (or screen space) at once, than this FOPO display fits the bill. True, Windows already supports options for single-screen work, including notifications and virtual desktops. However, the side screens work perfectly for email, chat, and other peripheral applications, leaving the main screen for your primary task.

Each screen has a significant range of motion; the left screen swivels up to 235 degrees, while the right swivels 180 degrees. Because of the way the screens are oriented, that means that the left display can swivel all the way to the back of your laptop, transforming it into a supplementary display for presentations in a pinch.

Before considering FOPO’s 13-inch portable display, however, you should be aware of some significant caveats that won’t impact whether you should buy it, but whether you can actually use it. Unfortunately, we’d do you a disservice if we didn’t note these high up in the review.

When evaluating FOPO’s design, the most important measurement isn’t listed among the specifications: The dimensions of the laptop you already own, which will be encased by the triple laptop framework at all four corners. You’ll need to own a laptop that falls within the following sizes:

Do not casually read this and think, everybody has a laptop that’s between 11 and 16 inches. Laptop displays are measured via the diagonal, and while a 13-inch Razer Book measures a sufficient 11.6 inches long, the screen ratio pushes it below the required nine inches high, at 7.2 inches. It won’t fit. Likewise, the thickness of laptops is typically measured while closed. In this case, it’s the thickness of the top half, in which the display is mounted, which matters. Thinking about mounting two displays alongside your Surface Pro 8? At 0.37 in., that tablet is too thick. Plan out your purchase, or risk sending it back. 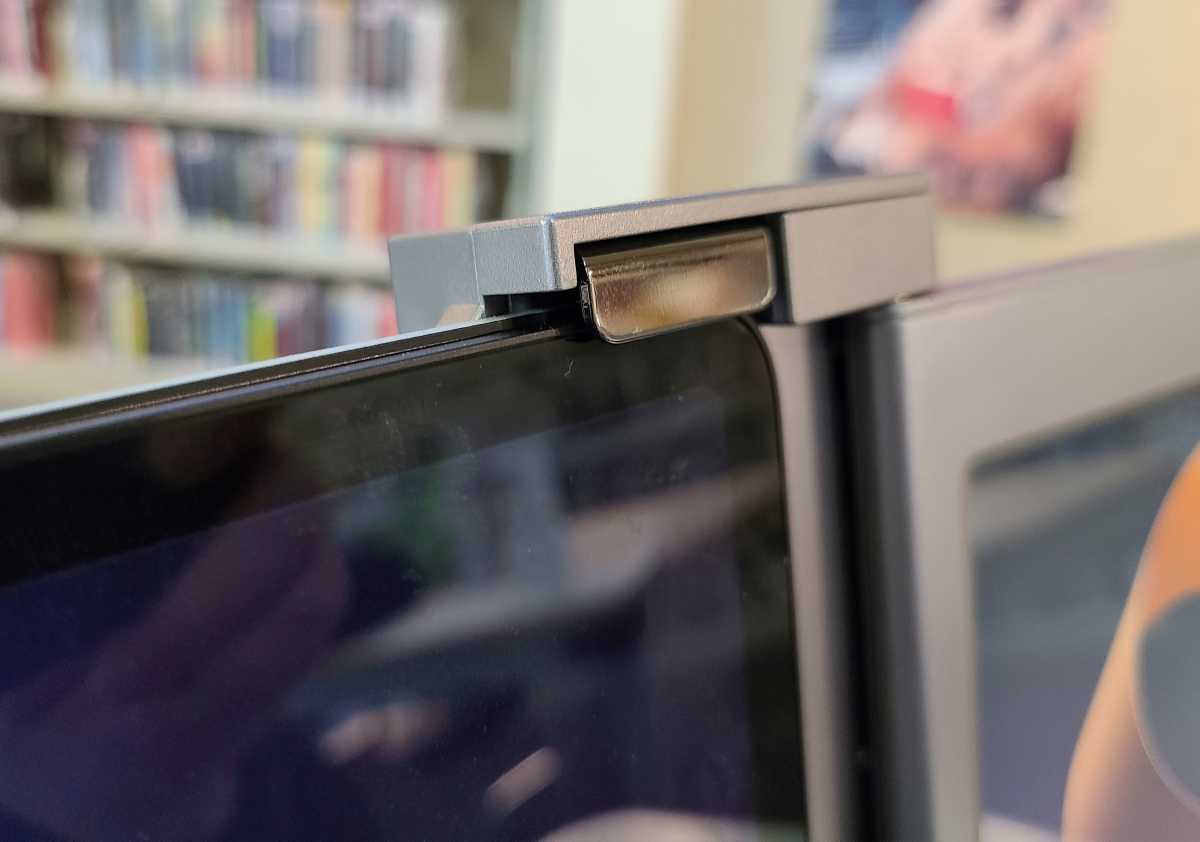 FOPO’s display bracket rests on top of your laptop’s display, supported by it.

FOPO lists a number of supported laptops in its Amazon listing, which shouldn’t be taken as gospel. If you own a laptop that meets the specifications (Microsoft’s Surface Laptop Studio seemed to work well, in my case) you should be okay. You’d be well served to consult your laptop’s manual or its online specifications before you buy, or pull out a ruler instead. 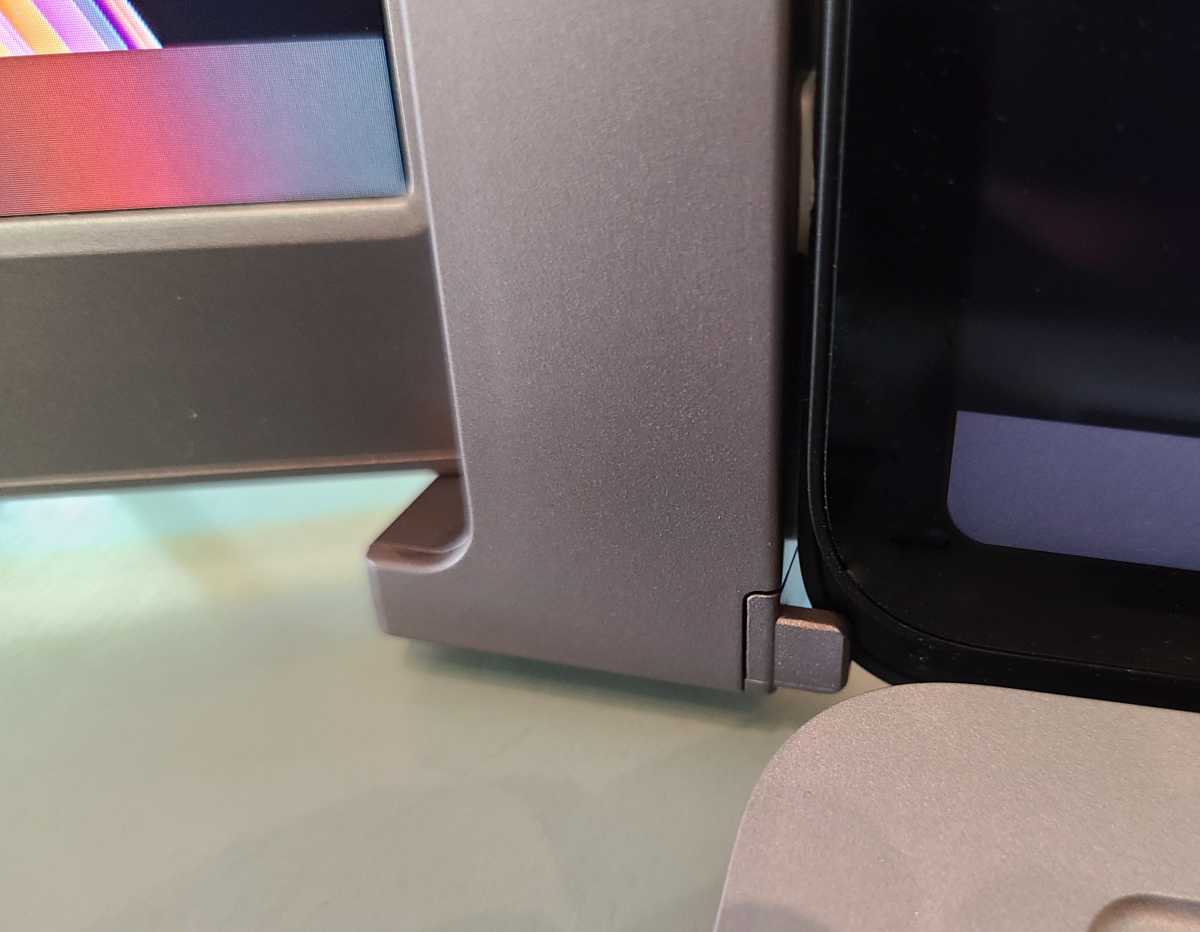 A second tab holds the bottom of the laptop’s screen in place and prevents it from swinging loose.

Secondly, you’ll also need to know the ports your laptop uses. This is a good-better-best situation. If you own a laptop with two USB-C Thunderbolt ports (either Thunderbolt 3 or Thunderbolt 4) you’ll be able to simply connect each port to the corresponding port on the display — the included pair of USB-C to USB-C cables will supply power as well as data, and that’s that.

If you lack those ports or your laptop has a single non-Thunderbolt USB-C port or a single HDMI port, you’ll have to use the two pairs of included cables (USB-C to USB-A, or HDMI to mini HDMI) to establish separate video and power connections to each display. You may need to connect the included 2-amp power adapter, too. Essentially, you can end up with cables snaking all over your desk if you own an older laptop.

One quirk of the design (which appears to be the same for competing triple-display manufacturers, too) is that FOPO didn’t take the time to adjust the button layout for the two displays. In other words, the buttons are arranged correctly on the left-hand display, and upside-down on the other.

A power and volume rocker are at the top of the display, above a basic USB-C port, a miniHDMI port, and the high-speed Thunderbolt 3 port to the bottom. (FOPO doesn’t advertise the port as Thunderbolt compatible on its Web site, but it does in its manual.)

The third and final caveat involves the design of the FOPO display, and how it’s packaged. FOPO apparently opted for a folding design, rather than thicker sandwich option. That means when you fold the display down, one screen is folded inward, protecting it, but the other is exposed to the outside world. We’d recommend buying a laptop screen or perhaps even packing the FOPO triple display inside of its box while traveling. That makes it a bit less portable, but will help protect it. (FOPO also includes two screen protector films inside the box for additional protection.) 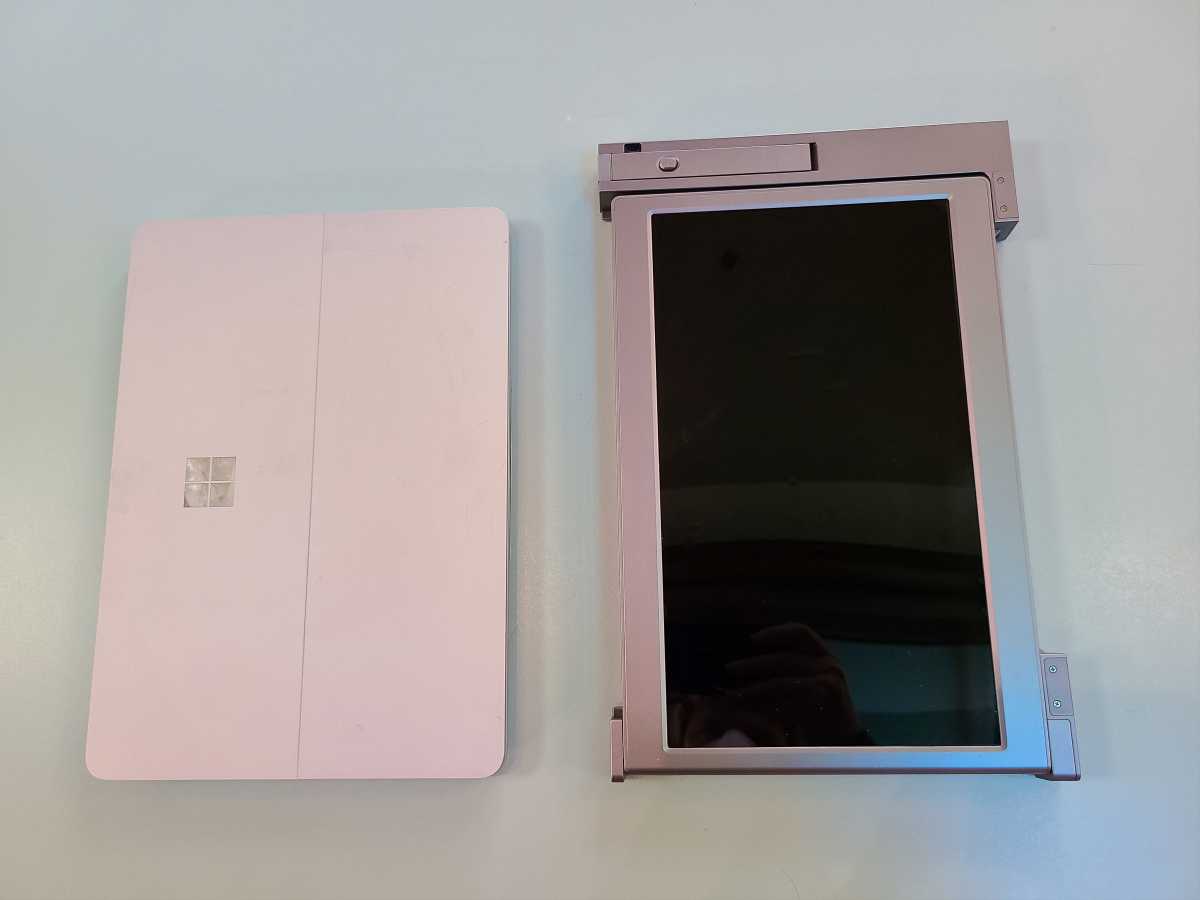 When folded, one of the FOPO screens is exposed. You’ll need to transport it in the box or in some sort of sleeve to protect it.

Stepping through all of these caveats is exhausting. Fortunately, actually using the FOPO 13.3-inch portable monitor is much simpler.

The triple display does take a minute or two to set up, while ensuring each corner of the laptop’s screen finds its corresponding niche within the bracket. Fortunately, the Microsoft Surface Laptop Studio I used as a test bed included a pair of Thunderbolt 4 ports. Don’t worry if your laptop places both ports on one side, as the USB-C cables are long enough to accommodate this.

The bracket appears to be constructed of plastic, striking a balance between weight and stability. There’s definitely some wiggle in the chassis, but each display’s hinge is strong enough to preserve the screen orientation. On the Studio, however, the kickstand didn’t always reach long enough to support the laptop, though Microsoft’s build quality seemed over-engineered enough to support it. I do have concerns about the long-term impact of the bracket’s weight on a laptop’s screen glass, but I simply can’t test whether they’re unfounded or not. 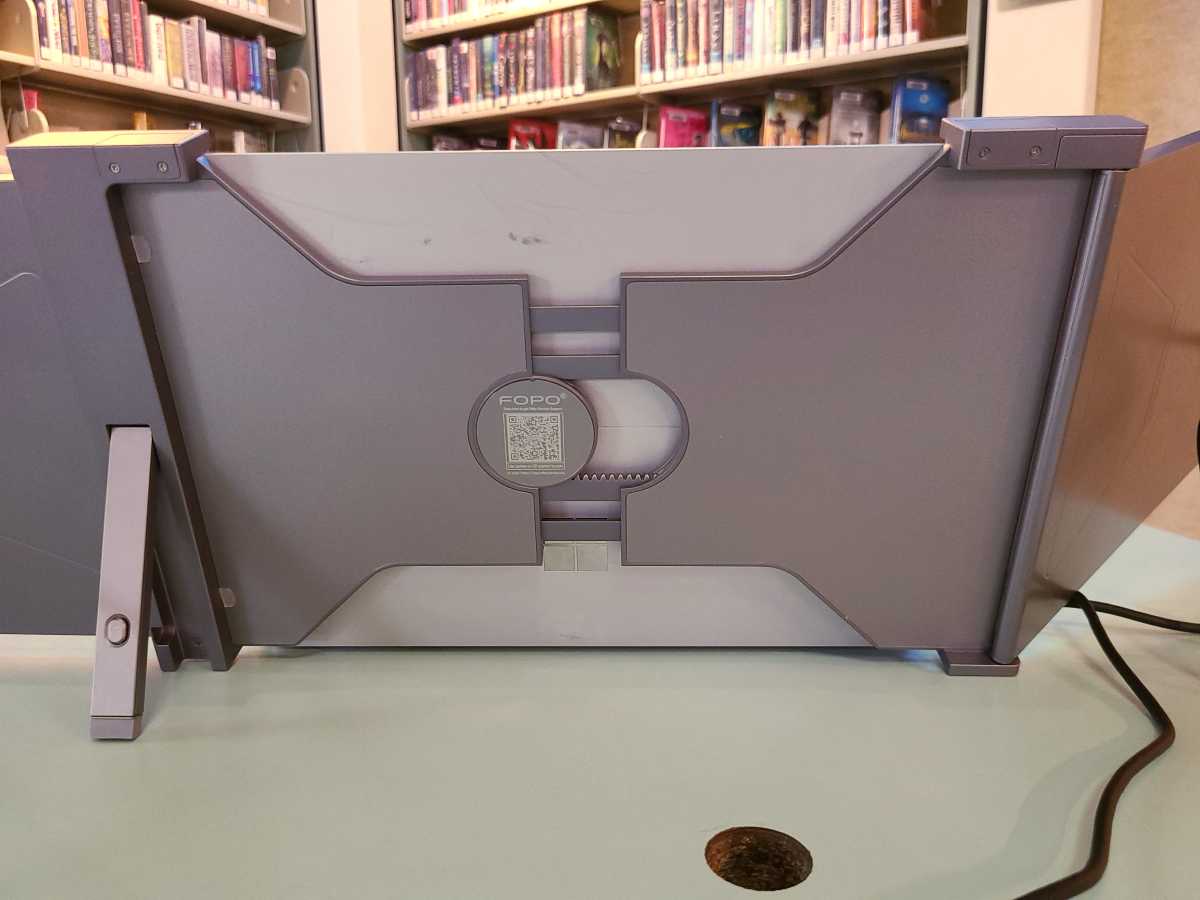 The FOPO gearing slides the bracket left and right, clasping your laptop’s display.

Don’t expect uniformity between the two displays. The range of luminances FOPO quotes should be a clue; the right display output a comfortable 311 nits at maximum brightness, while the left display put out a surprisingly high maximum of 426 nits, based on our colorimeter. Those are both more than enough for the 260 nits or so we deem suitable for everyday work.

Not surprisingly, however, the color gamut was nothing to write home about: a measured 74 percent of the sRGB gamut, and 55 percent or so of AdobeRGB. Each screen has its own hardware adjustments for brightness, contrast, color temperature and more. There’s also an option to minimize blue light and even a so-called HDR mode, though there’s no official certification that we could find. Don’t expect too much here. 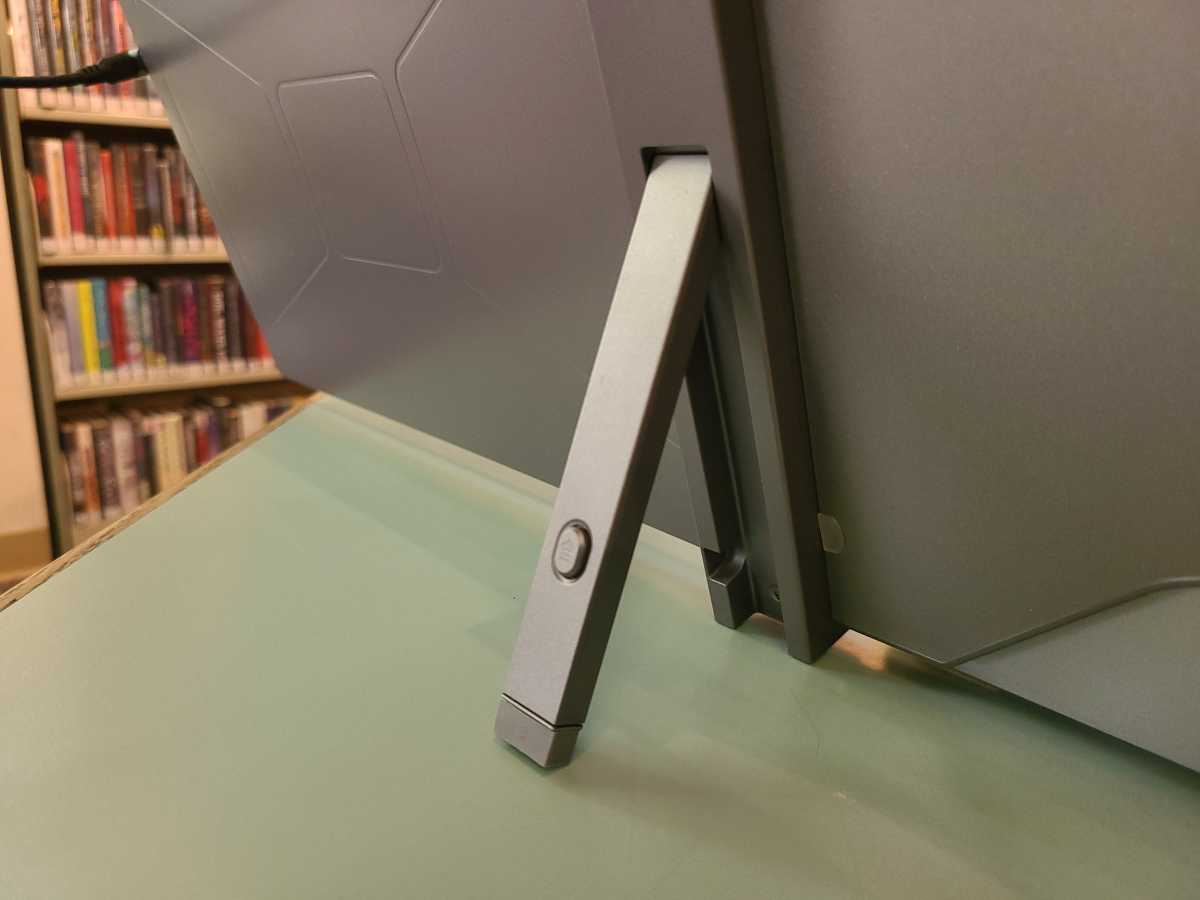 FOPO provides a popout kickstand that helps take the weight.

Naturally, the additional screens consume additional power, and powering them without an external power draw will have a profoundly negative impact on battery life. Using our standard battery rundown test (screen set to a fixed brightness level, playing back a single looped 4K movie with earbuds plugged in) the Surface Laptop Studio’s battery life dropped from nearly 13.5 hours (809 minutes) to 181 minutes, or about 3 hours. That’s an over 75 percent decrease. Oof. Stay plugged in while you’re using FOPO’s screens. 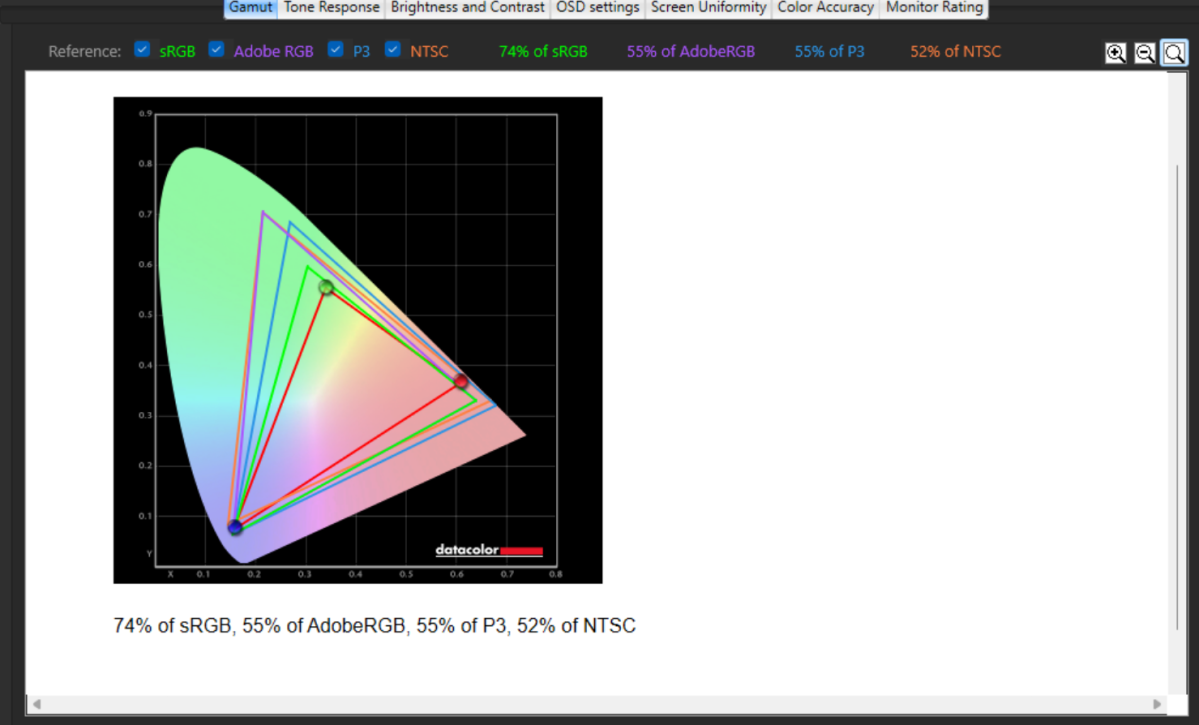 Conclusion: A niche product, but a decent one

FOPO gives you plenty of reasons not to buy its triple display, from its power consumption, the exposed screen design, the fit, even its silly name. Honestly, though, we can’t help but like it. On Amazon, where FOPO (and it rivals) can control their listings, the manufacturer is extremely explicit about the required dimensions of the laptop. As more laptops adopt Thunderbolt, too, the appeal of this display will widen. Most of all, we have reservations about how the screen is exposed to the outside world, and suspect that some sort of sleeve or case will be added in over time.

To be fair, the additional screens are a little unfriendly in a coffee shop or even in a communal workspace. (Manspreading, meet nerdspreading.) On the other hand, it would seem perfectly reasonable to tote a lightweight, portable, long-lasting notebook from meeting to meeting, then connect the FOPO triple display (and the laptop charger!) for some productive late-night work.

So FOPO’s triple’ display is, for us, a niche product. That’s not a criticism — it addresses the need for additional screens on the go exceedingly well. We’d just recommend that if you buy it, you do so with eyes wide open. And, ahem, a ruler nearby.